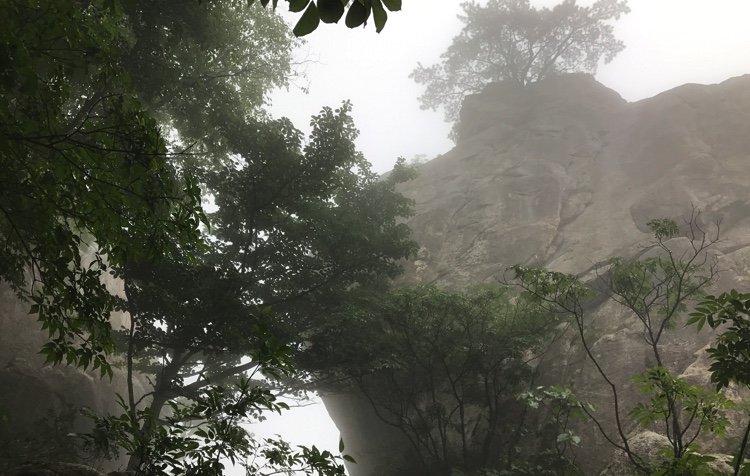 The Dragon’s Gate Cave is truly a precious place: there’s a breathtaking rock perched on the cliff, a pine tree that grows out of a rock, and an exquisite view of the deep valley of Mt. Daedun.

The Dragon’s Gate Cave also boasts many special rocks. Some look like human sculptures, some are as tall as towers, some take the form of a person in prayer, some have images of figures embracing each other, and yet others are in the shapes of animals.

There is a particular rock by the Dragon’s Gate Cave which looks like it has been sliced in half by a giant knife. Because of that, the space in the middle of the rock forms a narrow path—so narrow that someone with a big build cannot pass through. This path was right next to the spot where I frequently prayed during my ascetic life of prayer.

When I started leading a church, I brought some members to see the Dragon’s Gate Cave. A curious male Deacon wanted to visit the place where I had prayed, but his big build would have made it near impossible for him to pass through the narrow gap in the rock. Nevertheless, he exclaimed, “Teacher, even though I’m big in size, I’m really good at climbing mountains!”

I asked him, “You are heavier than me by at least 22 lbs; are you sure that you’ll be able to pass through?”

He answered, “I can definitely pass through effortlessly! In the past, I’ve frequently climbed steep mountains where I could have easily fallen to my death. Let me first have a try at the entrance. If I really cannot pass through, I’ll just watch from there instead of going further.”

I cautioned him, “No one will be able to help you while you’re travelling on that path. You’ll have to rely on your own skills and abilities to pass through.”

The male Deacon then entered the entrance of the narrow path. I asked, “Can you fit?”

His worried wife pleaded with him, “My dear, listen to the Teacher! Please don’t go in.”

He continued to take a few steps along the difficult path, pressing his back and both hands against the rocks, and moving slower than a tortoise. It was so difficult that he could only inch forward one tiny step at a time.

He stopped and said to me, “It’s so difficult to get through!”

I replied, “If you’re not confident, come back out!”

He countered, “Even though it’s very difficult to go forward, I will try!”

I said, “Right now, I can only pray for you. Please call out to the Lord to grab hold of you tightly!” The male Deacon then called out to the Lord while he was moving forward and in the end, he made it!

I took the path to get to the place behind the rock where he was waiting. He was breaking out in a cold sweat and was so nervous that he froze up.

His wife said to him, “Since I am smaller in size than you, I can definitely pass through as well!”

What I realized from this incident

On that day, we all travelled along the path through “the rock that was sliced in half with a knife”—the Narrow Gate Rock, which is symbolic of the narrow gate mentioned in

In our lives, too, we encounter situations like the narrow path, where challenges abound and are difficult to overcome. Nowadays, we can live up to a hundred years, but people might die 30, 50, or even 70 years earlier than expected due to a single accident—isn’t that scary? While praying in the mountains, I called out to the Lord countless times to protect my life in the midst of danger.